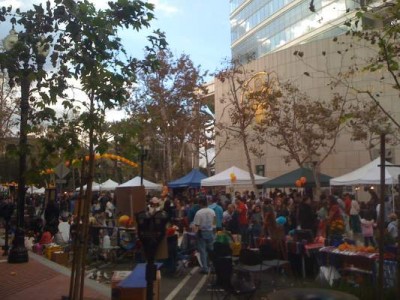 But friends tell me that while they enjoyed the event, they also started to see major signs that hipsters are trying to turn this special cultural event into yet another Mexican drinking holiday, like Cinco de Mayo.  The OC Weekly saw this coming, running a Do’s and Don’ts article before the Noche de Altares event.  Here are a few excerpts from that article: 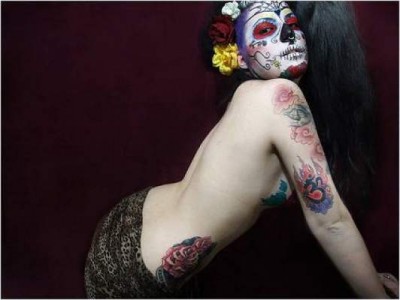 What would your Abuelita say about this?

Here is a brief history of the Dia de Los Muertos courtesy of Wikipedia:

Day of the Dead (Spanish: Día de Muertos) is a Mexican holiday celebrated throughout Mexico and around the world in other cultures. The holiday focuses on gatherings of family and friends to pray for and remember friends and family members who have died. It is particularly celebrated in Mexico, where the day is a bank holiday. The celebration takes place on October 31, November 1 and November 2, in connection with the Christian triduum of Hallowmas: All Hallows’ Eve, All Saints’ Day and All Souls’ Day.[1][2] Traditions connected with the holiday include building private altars called ofrendas honoring the deceased using sugar skulls, marigolds, and the favorite foods and beverages of the departed and visiting graves with these as gifts. They also leave possessions of the deceased.

Scholars trace the origins of the modern Mexican holiday to indigenous observances dating back hundreds of years and to an Aztec festival dedicated to the goddess Mictecacihuatl. The holiday has spread throughout the world: In Brazil Dia de Finados is a public holiday that many Brazilians celebrate by visiting cemeteries and churches. In Spain there are festivals and parades, and, at the end of the day, people gather at cemeteries and pray for their dead loved ones. Similar observances occur elsewhere in Europe, and similarly themed celebrations appear in many Asian and African cultures.

The Day of the Dead celebrations in Mexico can be traced back to a precolumbian past. Rituals celebrating the deaths of ancestors had been observed by these civilizations perhaps for as long as 2,500–3,000 years.[3] In the pre-Hispanic era skulls were commonly kept as trophies and displayed during the rituals to symbolize death and rebirth.

The festival that became the modern Day of the Dead fell in the ninth month of the Aztec calendar, about the beginning of August, and was celebrated for an entire month. The festivities were dedicated to the goddess[4] known as the “Lady of the Dead”, corresponding to the modern Catrina.

I support what the folks at Calacas Café and El Centro Cultural de Mexico have done with this event.  Yes it has grown considerably and that is fine but if some folks in Downtown Santa Ana want to make it into a drinking holiday then they are doing our community a total disservice.