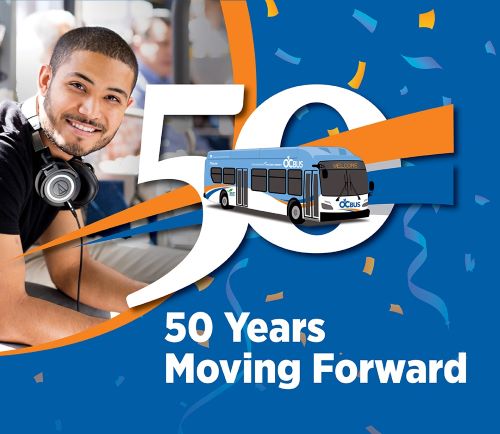 ORANGE – The Orange County Transportation Authority has reached a positive milestone with OC Bus ridership trending upward and averaging 100,000 average weekday riders for the first time since the start of the COVID-19 pandemic.

The milestone comes as OCTA has put an emphasis on gradually and safely restoring bus service and has implemented recent programs to make riding the bus free for tens of thousands of students and youth throughout Orange County.

“During the height of the pandemic, we saw a sharp decline in bus ridership,” said OCTA Chairman Mark A. Murphy, also the Mayor of Orange. “Now, it’s highly encouraging to see this steady climb, which is only possible through thoughtful planning, the hard work of coach operators and OCTA staff, and good relationships built with the community.”

Among the other data presented to the committee:

In March 2020, at the start of the COVID-19 pandemic, OCTA reduced bus service levels to approximately 40% of regular service, to protect public and employee health while continuing to provide lifeline transportation for people to reach essential jobs and medical appointments.

Prior to the pandemic, the OC Bus system saw an average of nearly 120,000 riders per day. That number dropped in March and April 2020 to approximately 33,000 daily riders at its lowest.

Ridership gradually returned as more businesses reopened and service was incrementally restored, with safety as the top priority and guidance from local, state and federal health officials.

At the same time, OCTA staff with guidance from the Board of Directors, continued to innovate and look at ways to make the bus system more efficient.

Earlier this year, the Board voted to make a pilot program permanent offering free bus rides to all youth ages 18 and younger. The Youth Ride Free pass, available through local school districts and the OCTA store, has so far provided more than 2.1 million rides.

OCTA also worked to expand the College Pass Program, which began in 2017 at Santa Ana College. Through the shared-cost program, community college students get a bus pass as part of their registration that allows them unlimited free rides on OC Bus throughout the semester.

In August, OCTA marked another important milestone, expanding the College Pass Program to all nine community colleges in Orange County.

For other riders, OCTA continues to offer affordable rides via public transit, with bus rides at just $2 per ride or $5 for a day pass and additional discounted pass programs.

The recent ridership numbers also received a boost, as they typically do this time of year, with the start of the school year for many primary and secondary schools, as well as the start of the fall semester for local colleges and universities.

OCTA continues to examine ways to make the bus system more efficient. A plan to reimagine OC Bus service to better connect Orange County residents, workers and visitors to the places they want to travel is currently being finalized, with strong input from the community. The Making Better Connections plan is expected to be considered by the board later this year.

For more information about riding the bus in Orange County, visit www.OCBus.com.