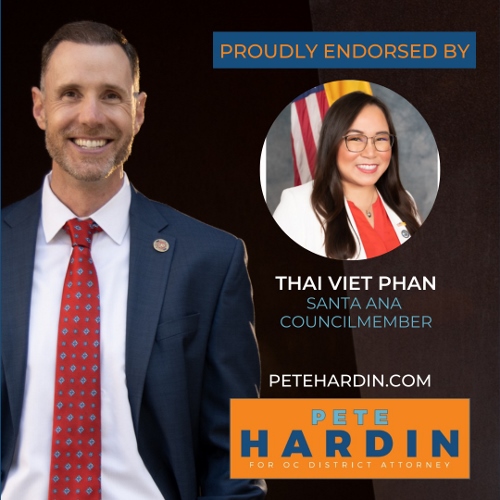 SANTA ANA–Today, former Marine Judge Advocate Pete Hardin called on District Attorney Todd Spitzer to resign following revelations that he inappropriately and illegally considered race during a meeting to decide whether to seek the death penalty against a Black defendant.

“Todd Spitzer’s consideration of race while deciding whether or not California should execute a black man isn’t just appalling, it’s disqualifying,” said Former Marine Judge Advocate Pete Hardin. “Our system of justice must be colorblind, and the chief law enforcement officer just showed himself to be anything but. Todd Spitzer’s racist remarks and dated thinking have infected cases across the office and cast a shadow over every prosecution involving a person of color.

“These comments top off a career that has fundamentally undermined trust in our criminal justice system. The fact that he made these remarks so openly reflects an utter lack of awareness and a fundamental misunderstanding of Orange County values. It also speaks to the culture he has created around him; one in which he feels free to make racist comments, illegally release employee personnel information, fire subordinates to protect himself, and protect and promote his best friend who is a known pervert that sexually harassed multiple women. It’s no surprise that office morale is at an all-time low and that scores of talented staff and attorneys are fleeing his office. Spitzer lacks the maturity, moral values, and principles to run this office. He is unfit for leadership at any level, let alone as the chief law enforcement officer and gatekeeper to Orange County’s system of justice.”

“The implication of these racist remarks extends far beyond the instant case. The elected District Attorney has now shown himself to be a racist, and to ensure the fair administration of justice the Attorney General should investigate how the bigotry of Orange County’s top law enforcement official has impacted other cases involving people of color. Most importantly, Todd Spitzer must resign immediately. His failure to step aside will further degrade public trust in one of our most important public institutions. That threatens to endanger public safety when crime is up double-digits across the board and when homicides have reached a 23-year high in Orange County.”

According to numerous studies, the death penalty is racist in its application. Defendants convicted of killing white victims are executed at a rate 17 times greater than those convicted of killing Black victims. According to the Death Penalty Information Center, 75 percent of death penalty cases involve the murder of white victims, even though blacks and whites are about equally likely to be victims of murder. A bias towards white-victim cases has been found in almost all sophisticated studies exploring this area over many years.

DA Spitzer’s remarks also raise the prospect of a violation of the rules of professional responsibility governing attorney conduct. According to Rule 8.4.1, a lawyer shall not, “unlawfully harass or unlawfully discriminate against persons on the basis of any protected characteristic.” The American Bar Association rules go further, making it professional misconduct, “for a lawyer to engage in conduct related to the practice of law that the lawyer knows or reasonably should know is harassment or discrimination on the basis of various categories, including sex, race, religion, sexual orientation and gender identity. The rule is violated by harmful conduct, “typically targeted at a particular individual or group of individuals, such as directing a racist or sexist epithet towards others or engaging in unwelcome, nonconsensual physical conduct of a sexual nature.”

Conduct that violates the rule also harms the legal system, the opinion concludes, because enforcement is “critical to maintaining the public’s confidence in the impartiality of the legal system and its trust in the legal profession as a whole.”