Protesters to occupy Anaheim next, on Oct. 10 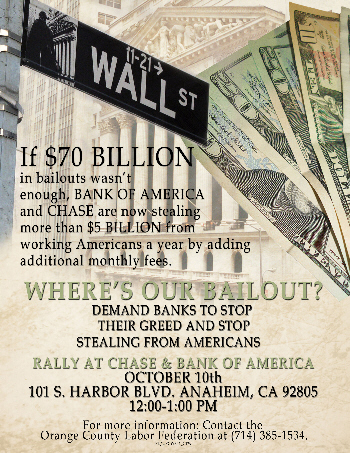 The Occupy American movement is going to congregate in Anaheim, on Oct. 10, from 12 noon to 1 pm, at 101 S. Harbor Bl, to protest Chase and Bank of America.

It would appear that the unions are now involved in this, which comes as no surprise.  What is funny is that they are mad at the banks for charging debit card fees, but it was the Democrats in Congress who passed a bill that led to this.  Did they really think the banks would just eat their lost profit?  Would you?

To add to the irony, the protesters are mad about the bailouts, which Obama (and Bush) supported and which the Democrats in Congress approved (and quite a few dumb Republicans too).

If these guys really want to protest they should quit the red and blue parties and vote for any third party candidates instead.  Have they forgotten that Obama’s Chief of Staff was working for Goldman and Sachs when Obama hired him?

If you want to fix this country, may I suggest:

9 thoughts on “Protesters to occupy Anaheim next, on Oct. 10”