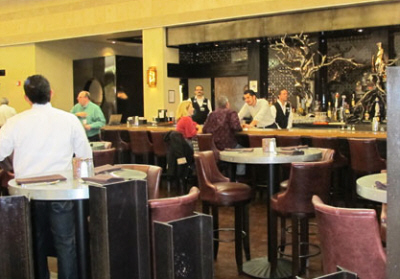 “We are pleased to announce the opening of Javi’s at John Wayne Airport,” said Airport Director Alan L. Murphy. “This is a great addition to the many new offerings for dining at the Airport.” Javi’s will be conveniently located near Terminal C’s international gates, which will serve as the gateway from Orange County to Mexico beginning this June with Southwest’s non-stop flights to Cabo San Lucas and Mexico City.

Javier’s menu items include fresh seafood and authentic regional dishes, as well as familiar fare such as nachos, quesadillas and taquitos. All dishes are made with fresh, locally sourced ingredients, including handmade salsa and tortillas from local vendors. Javi’s features a Baja-resort themed décor, blending indoor and outdoor environments such as a faux-patio and ‘tequila tree’, which features a display of 25 premium tequilas.

For more information on Javi’s and other JWA dining options, visit http://ocair.com/terminal/restaurants/. For additional amenities and a directory of the Airport, click here.

HMSHost is a world leader in creating dining and shopping for travel venues. HMSHost operates in more than 100 airports around the globe, including the 20 busiest airports in North America. The Company has annual sales in excess of $2.5 billion and employs more than 34,000 sales associates worldwide. HMSHost is a part of Autogrill Group, the world’s leading provider of food & beverage and retail services for people on the move. With sales of over €5.7 billion in 2010, the Group operates in 37 countries and employs some 62,000 people. It manages over 5,300 stores in more than 1,200 locations worldwide. Visit www.HMSHost.com for more information and find us on Facebook at HMSHost Making the Traveler’s Day Better.