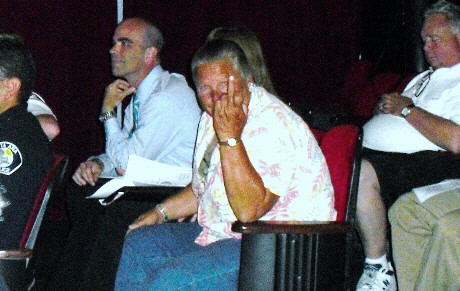 None of the other Council Members, including Benavides and Bustamante, want anything to do with the Review Committee.  I can’t blame them.  The Code of Ethics was designed to muzzle bloggers who were put on City Commissions.  Ironically it is now being used by the Usual Suspects to attack Santa Ana’s Council Member.  And that obsessed Long Beach blogger has written not one but two posts about the Santa Ana Code of Ethics Review Committee.  Good grief!

But there might be a better way – I think perhaps that it might be time to launch a Code of Ethics panel and populate it with current and past City Commissioners and community and business leaders (who would not have to live here but should at least run a business here).  The Usual Suspects of course need not apply.

How about that former City Commissioner who was detained by the SAPD after he harassed prostitutes on Harbor Blvd.?  Should anyone who has a police record be allowed to serve on a City Commission?  I would hope not.

Or how about that failed City Council candidate who got caught sighing the nomination papers of one of his Council challengers?  Anyone caught engaging in election shenanigans should NOT be allowed to serve on any City Commissions.

What about the former City Commissioner who went berserk at a public meeting in Fullerton?  Commissioners who verbally assault people should of course not be allowed to serve in Santa Ana.

How about the former Councilman who was visibly drunk the last time he was sworn into office – and who now is involved in conducting neighborhood Wine Walks that lack city permits?   Clearly those with drug and alcohol problems need not be considered for any city posts.

How about that Neighborhood Association president that likes to extend her middle finger at City Council meetings?  No bueno!

Clearly we need to consider empowering an Ethics Panel to consider these suggestions and to bring positive change to our Code of Ethics.

« Outsourcing to the Friends of the Santa Ana Zoo may be a bad idea after all
Support the Santa Ana Police Officers Association’s fundraiser on Feb. 4 »