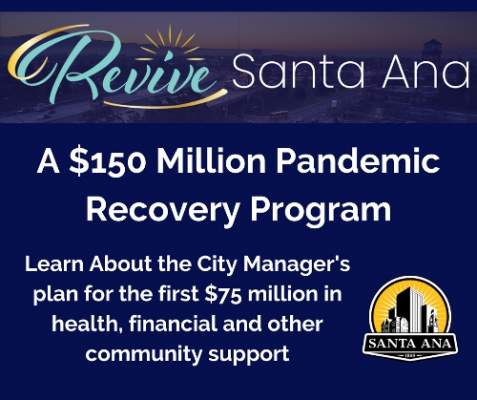 SANTA ANA, Calif. – City Manager Kristine Ridge on Tuesday presented the Santa Ana City Council with a proposal for a $150 million pandemic recovery initiative called Revive Santa Ana, which will be funded through the American Rescue Plan Act of 2021.

Funding for the program includes $128.4 million from the federal legislation, known as ARPA, and additional expected federal housing allocations of $21.5 million.

“This ambitious and comprehensive initiative is designed to provide a range of economic, financial, educational and health support to residents and businesses, while also allowing the City to reimagine the services, infrastructure and programming it provides,” City Manager Kristine Ridge said. “Through this effort, we will not only help our community recover from the pandemic today, but also create a safer, healthier and more equitable future.”

The proposal, presented during a City Council budget workshop on Tuesday, follows the announcement last week by the federal government of updated funding allocations and new guidelines on how that money may be used.

In preparing the Revive Santa Ana proposal, the City has been actively seeking public feedback over the past month at community meetings, during a virtual town hall last week, and through an online and paper survey that received over 1,500 responses.

Tuesday’s presentation outlined a plan for using the first half – $75 million – of the total expected federal funds. The City is required to spend all $150 million by the end of 2026. The plan includes five key areas of focus:

Recovery from the Pandemic – $6 million

Revive Santa Ana will continue to evolve as additional guidance from the federal government is received and priorities change. The City Council will consider a detailed spending plan at a future meeting. On Tuesday, Councilmembers requested to schedule a special meeting in the coming weeks to further discuss Revive Santa Ana and the City budget.