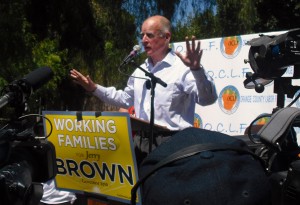 “Schools will be the big winner in the governor’s new spending plan, receiving $56.2 billion in state funds, an increase by $2.7 billion over the last year. That funding is set to jump to more than $66 billion by 2016,” according to the Los Angeles Times.

“School districts would receive a 35 percent increase in per-student funding for each of their English language learners and economically disadvantaged students, and districts where more than half of students fall into those categories would automatically receive an a second 35 percent bump in per-student funding, according to the governor’s plan,” according to the O.C. Register.

After striking out with education groups last year on a school finance overhaul, the governor has rechristened his plan the “Local Control Funding Formula” and tinkered with its rules.  Among the new wrinkles, Brown would shift responsibility for adult education to the California Community Colleges system, rather than K-12 districts, said the sources, who were not authorized to speak publicly about the proposal, according to the Sacramento Bee.

This is all huge news for both the Santa Ana Unified School District (SAUSD) and the Rancho Santiago Community College District (RSCCD).  The Orange County Department of Education will lose some funding that will go to the RSCCD, as they now will be responsible for educating adults.  I am assuming that the RSCCD will take over the County’s continuation schools.

It looks like the SAUSD and RSCCD Trustees will have a lot of money to work with in the next year.  We just elected several excellent Trustees, including RSCCD Trustees Jose Solorio and Claudia Alvarez and SAUSD Trustee Cecilia Iglesias, who will no doubt work hard to better serve our neediest students in 2013 and 2014.