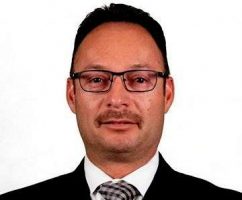 Federal authorities have been looking into the Santa Ana Police Officers Association, specifically seeking information about Gerry Serrano, the union’s president who is an influential and controversial figure in city politics, according to the Voice of OC.

Serrano currently nets over half a million dollars in salary and benefits per year, according to Transparent California.

The Voice of OC also reported that Serrano is in the midst of seeking his own re-election as president of the Santa Ana Police Officers Association (POA), with ballots due from the union’s members over the next couple of weeks. He’s being challenged by Adrian Silva, a sergeant at the SAPD. See the video above which features Silva’s comments about the election.

The police union this year is again the largest spender in Santa Ana elections, with over $200,000 spent so far on ads supporting candidates Jose Solorio, Mark McLoughlin, and car salesman Vic Mendez, according to the Voice of OC.

The POA never should have undertaken the recall of former City Council Member Ceci Iglesias. They got their raise. The recall was unnecessary. Now they are backing Mendez instead of the Ward 5 incumbent, Juan Villegas, an actual member of law enforcement and perhaps our best Council Member.

You have to wonder if Serrano will be able to hang on to his job as union President. Surely the POA members must be getting sick of all the lame drama by now?