Notice: Undefined variable: remote_version in /home/newsantaana/public_html/wp-content/themes/ifeaturepro5/functions.php on line 417
 New Santa Ana | Foster mom to be arraigned for being an accessory to the rape of her kids
Santa Ana's top news & views blog 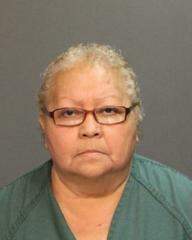 SANTA ANA – A foster mother will be arraigned tomorrow for being an accessory to her husband’s rape of a child under their care. Maria Esther Hernandez, 59, Santa Ana, is charged with one felony count of accessory after the fact. If convicted, she faces a maximum sentence of three years in state prison. She is being held on $20,000 bail and is scheduled to be arraigned tomorrow, Thursday, at 10:00 a.m. in Department CJ-1, Central Jail, Santa Ana.

At the time of the crimes, the victims were living in the defendants’ home as foster children. Felipe Hernandez and Maria Hernandez are accused of violating their position of trust.

Felipe Hernandez is accused of threatening Jane Doe #2 that he would not provide her with any money and other privileges if she did not comply with his sexual demands and threatened to take away Jane Doe #2’s cell phone and laptop.

In the summer of 2012, a family member of the defendant discovered a memory card containing a video of Felipe Hernandez touching Jane Doe #2 on her buttocks and anus and reported it to the Santa Ana Police Department (SAPD), who is investigating this case.

If convicted, Felipe Hernandez’s lifetime sex offender registration will bar him from entering County recreational areas and City parks which have passed the Sex Offender Ordinance. Visit www.orangecountyda.com to read the prior press releases on the County’s Sex Offender Ordinance as well as the 14 other cities that have enacted the Child Safety Zone Ordinance.

The investigation is ongoing. Anyone with additional information or who believes they have been a victim is encouraged to contact Supervising District Attorney Investigator Anthony Sosnowski at (714) 347-8794 or SAPD Detective Ed Zaragoza (714) 245-8386.