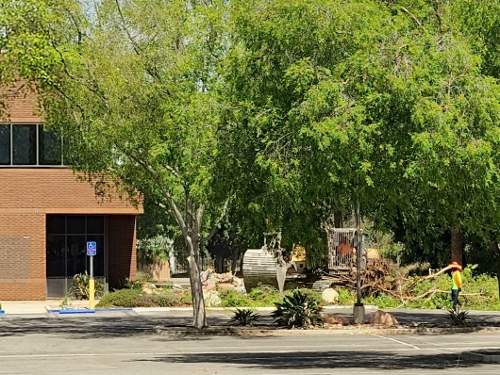 Police sirens blared in the Park Santiago Neighborhood this morning as SAPD police officers cleared the homeless out of the empty, dilapidated building at 2525 N. Main St., in Santa Ana Then the heavy equipment moved in and the long-awaited demolition of the building began.

Police vehicles stayed on site at the north, south and west end of the facility to ensure that no one would enter and get injured during the demolition, which could take up to three days to complete.

By now there should have been a luxury apartment project at this site but the neighborhood NIMBYs succeeded in fighting off the developer as they were able to flip the votes of Council Members Vince Sarmiento and David Penaloza, who had previously supported the apartment project.

Sarmiento is now the Mayor and he is unlikely to change his mind about the apartment project.

The NIMBYs have made it clear they prefer the entire lot be turned into a parking lot for the Discovery Cube. That is unlikely to happen even though the develop has already sold a portion of the property to the Discovery Cube for that project.

Most likely the developer will try again to build a housing project in the future but will perhaps scale his plans down further or switch from apartments to homes.

The entire city lost out on considerable tax revenue when the project was terminated.