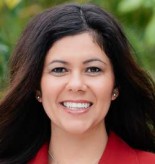 Martinez has spent the past year as Vice President of SCAG, during which the organization approved its 2016-2040 Regional Transportation Plan/Sustainable Communities Strategy (RTP/SCS). The plan, which serves as a blueprint for meeting the six-county region’s growth over the next quarter-century, identifies $556.5 billion in transportation investment during that period, including $70.7 billion in goods movement strategies. Freight, logistics and related industries represent one-third of all jobs and economic activity in the SCAG region.

“It’s a tremendous honor to serve as the President of SCAG, a world-class metropolitan planning organization that is directly responsible for developing long range plans that accommodate our region’s growth, support the regional economy, and enhance the quality of life for our communities,” stated Martinez.

“Councilwoman Martinez’s leadership at the local, regional and national level is a tremendous asset to the City of Santa Ana. This important role and distinction speaks to her strong commitment to public service,” commented Santa Ana Mayor Miguel Pulido.

“We need to have the broader conversation of what goods movement means for our economy and our quality of life,” Martinez said. “Ours is the largest container port complex in the country. Making sure we’re all working together and have the pieces in place to maximize that opportunity is critical for our region.”

As a Santa Ana Councilmember, Martinez has been a leading advocate in the area of active transportation, and, in particular, bike and pedestrian safety. Yesterday, Wednesday, May 4th, she helped lead a pre-Conference symposium on this topic as part of SCAG’s Go Human campaign.

“Active transportation gives people greater options and it’s healthier,” Martinez said. “But as I’ve said about my own community, we need to be known as a region that promotes not just bicycling and walking, but safe streets for everyone.”

Walking and bicycling is part of a broader multimodal strategy for the six-county region to reduce congestion and improve air quality amid growth projections that call for 4 million additional people in Southern California by 2040.

“Multimodal transportation is equitable and it creates economic development opportunities. We need that. One in four children in our region lives in poverty,” Martinez said.

She believes SCAG can be a regional leader on other topics of importance to our region, such as earthquake retrofits. “To have a discussion on best practices would be valuable for all of our communities,” Martinez said.

SCAG is the nation’s largest metropolitan planning organization, representing six counties, 191 cities and more than 18 million residents. SCAG undertakes a variety of planning and policy initiatives to plan for a livable and sustainable Southern California now and in the future. For more information about SCAG, please visit: www.scag.ca.gov.

3 thoughts on “Councilwoman Martinez appointed President of the So. Cal. Assn. of Governments”