Benavides and Bustamante thwarted by the Santa Ana City Council 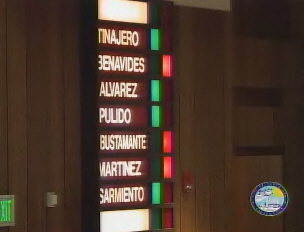 The Santa Ana City Council just voted on the 85 A item that was put on the agenda tonight, by Council Members Carlos Bustamante and David Benavides.  They said they weren’t trying to punish Mayor Pro Tem Claudia Alvarez, but that is precisely what they were trying to do.

Surprisingly, Council Member Michele Martinez sided with the “B-Boys.”  However they could not get four votes.  Indeed, they got punked.  Council Members Pulido, Sarmiento, Tinajero and Alvarez voted for the substitute motion.

Alvarez will continue to serve as Mayor Pro Tem and she will not be removed from any Commissions.