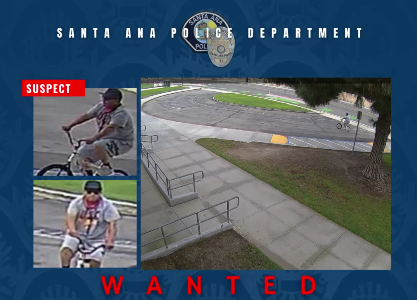 On September 18, 2022, the victim was walking westbound on Hazard Avenue, directly in front of Rosita Elementary, when the wanted suspect approached him.

The suspect was armed with a black handgun, which he brandished at the victim and demanded his gold necklace. The victim complied and handed over the necklace.

The suspect was last seen riding his bike northbound on Parsons Place from Hazard Avenue.

Anyone with information on the identity/whereabouts of the suspect is asked to contact Detective Greaver at DGreaver@santa-ana.org or (714) 245-8362