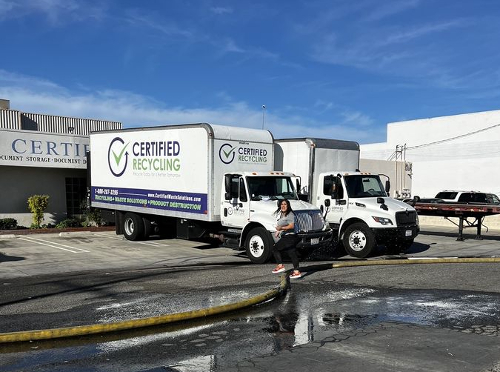 Thanksgiving was ruined for forty people who had to be evacuated when a huge four alarm fire broke out at a recycling facility in Anaheim, at the 500 block of South Rose St.

Callers reported the fire just before 11 p.m., at Certified Recycling.

Callers reported the fire at Certified Recycling, located in the 500 block of South Rose Street, shortly before 11:00 PM.

Firefighters from the City of Anaheim, the Orange County Fire Authority, and the Fullerton, Brea and City of Orange fire departments responded to the blaze.

The firefighters found piles of recycling materials that were engulfed in flames.

The 40 evacuees live at a adjacent apartment complex that was endangered as winds pushed the fire and smoke in their direction.

The firefighters took two hours to extinguish the fire and were able to save the adjacent structures.

Firefighters were still at the scene on Friday morning as they continued checking for hotspots in an 80-foot by 100-foot area, including a 20-foot tall trash pile of paper, cardboard and other combustible materials, according to the Anaheim City Fire Dept.

Arson investigators are also on the scene and plan to view surveillance videos and talk to witnesses, although as yet they do not know if this was an arson fire.