OCFA firefighters in Santa Ana came to the rescue of five cats trapped inside a burning home on Monday afternoon, according to ABC News.

A home located at the 300 block of East Virginia Street caught fire and responding firefighters quickly doused the flames as they searched for any residents inside the building. What they found was not people but rather five cats.

Sadly two other cats died as a result of the fire. The remaining cats were in rough shape. The firemen gave them oxygen via special air masks designed for cats. All OCFA firetrucks now carry these masks to help revive pets and save their lives.

OCFA firefighters believe the fire may have been started by the people living there as there appeared to be food left cooking on the stove.

The firefighters were able to contain the flames to the home’s kitchen and den. Damage is estimated at $220,000.

No humans were injured. In addition to discounted adoptions, visitors of all ages will enjoy the following: END_OF_DOCUMENT_TOKEN_TO_BE_REPLACED

Santiago Elementary School’s Random Acts of Kindness (RAK) Club, which is comprised of 30 5th grade scholars, can celebrate the success of their most recent project – “A Cause for Paws.”

Each trimester, the RAK Club ambassadors vote on a community service project to promote school-wide that will help all the students, parents and staff at Santiago practice kindness. This trimester, they organized “A Cause for Paws” to collect items needed by the Orange County Animal Shelter. END_OF_DOCUMENT_TOKEN_TO_BE_REPLACED

Catopia! Join OC Animal Care in celebrating all that is wonderful about cats during our Catopia celebration! Find your Purrfect Match on Saturday July 27 from 10:00 AM – 2:00 PM. END_OF_DOCUMENT_TOKEN_TO_BE_REPLACED 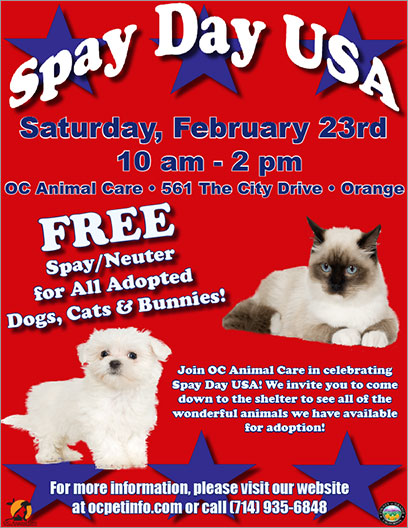 All adopted dogs, cats and bunnies will receive a free spay/neuter ($40 – $50 discount) during the entire event. Also, stop by the bake sale, pet tag and information booths between 10 a.m. – 2 p.m. for goodies and information. END_OF_DOCUMENT_TOKEN_TO_BE_REPLACED

SANTA ANA, CA (June 7, 2012) – The City of Santa Ana and the Santa Ana Unified School District are partnering to host a Flea Prevention Education Event. This event will take place on Saturday June 9, 2012 from 11 a.m. to 4 p.m. at Willard Intermediate School, 1342 N. Ross Street in the parking lot. Individuals who reside in the Willard neighborhood are invited to attend to learn strategies to safeguard their pets and homes from fleas. END_OF_DOCUMENT_TOKEN_TO_BE_REPLACED The Third Annual Fall Pet Days event is coming to Costa Mesa this weekend, at the Orange County Marketplace, on Nov. 6 and 7, from 7 am to 4 pm.  The event will include:

Sorry- no personal pets are allowed at the DC Market Place, or fairgrounds