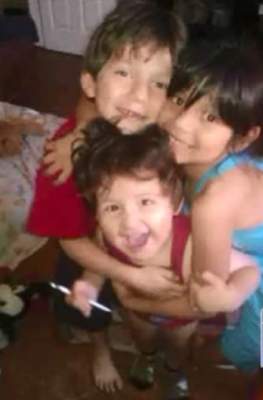 All three people were walking in the cross walk when the boy and grandmother were struck by a Ford F250 truck. The truck was driven by a 17-year-old. He and his younger brother, who were uninjured in the crash, stopped. They are cooperating with police, according to ABC.

The teenager was driving his 13-year-old brother to Douglas MacArthur Fundamental Intermediate school before going to Segerstrom High School, where the driver is a student, Bertagna said, according to the Fountain Valley Patch.

Police report that he was not speeding and that he was not cited.  The 17-year-old, who was reportedly devastated by the accident, has been turned over to his parents, according to CBS.

A Register photographer said a backpack was in the roadway. The accident occurred in a residential area, and a school is nearby, according to the O.C. Register.

KNX radio news reported that the grandmother and the 7-year old are at a local hospital.  There names have not yet been released.