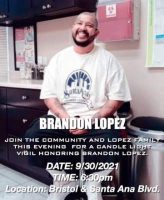 Santa Ana City Councilman Johnathan Ryan Hernandez is promoting an event on his Facebook page that apparently has not been permitted by the City of Santa Ana. The event appears to be in honor of Hernandez’ cousin, Brandon Lopez, an armed felon who was shot and killed in Santa Ana by Anaheim police officers after they tracked him down in a vehicle that was reported stolen by a girlfriend.

The event is set for Saturday, October 23, 2021 from 11am-7 pm. That is unfortunate as the event will take place after the scheduled 5K run in DTSA. There is also a scheduled Santa Ana College football game at 1 pm at the Santa Ana Stadium.

The event will take place at the intersection of Santa Ana Blvd and Bristol Street, Santa Ana, CA

The event is being marketed as #justice4brandonlopez – “We are standing in power as Black + Brown commUNITY” and is being presented by Artivist Entertainment and Grand Performances with support from Funk Freaks Records and the Cheat Code.

The event will feature live performances by:

It is amazing that an elected City Councilman, Johnathan Ryan Hernandez, is supporting and promoting an event that is not permitted by the City of Santa Ana. It should come as no surprise though given that Hernandez has also been dishonoring our flag at City Council meetings, sitting down and refusing to face the flag during the Pledge of Allegiance:

The SAPD will have the right to shut down the event. But will Mayor Vince Sarmiento actually enforce the law this Saturday?

14 thoughts on “Unpermitted event in honor of Brandon Lopez set for Oct. 23 in Santa Ana”