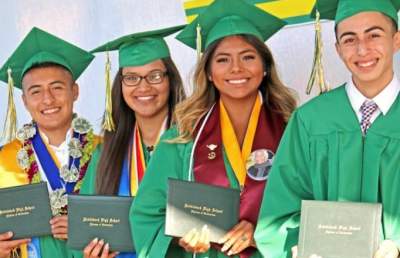 (May 10, 2017) – As the school year winds down, and students are working hard to finish their final projects and exams, the Santa Ana Unified School District is celebrating a significant increase of 11.5% in graduation rates over the last seven years.

“This is an example of the strong focus of the Board of Education on academic excellence and the hard work and dedication of our teachers and staff to ensure that our students are getting the support and resources that they need to excel, graduate from high school, and go on to college or directly into the workforce or military,” said John Palacio, President of the Santa Ana Unified School District Board of Education.

The District’s other four traditional high schools – Century, Saddleback, Santa Ana, and Santa Ana Valley high schools – have all made significant gains, with Saddleback leading with a 24.2% leap within the last seven years.

The school’s efforts to implement programs and resources to support student achievement and prepare students for college was recently noted in the U.S. News & World Report’s 2017 Best High Schools List. Middle College, Godinez, and Segerstrom were also included on the list.

“The success that our school has is a direct reflection of the outstanding efforts, hard work, dedication and love that our staff has for our kids,” said Eddie Bustamante, Principal at Saddleback High School.

“We at Saddleback believe in every one of our students. Therefore, we take the time to invest both academically and emotionally and to meet their needs and to ensure that they learn everyday.”

Saddleback has an enrollment of approximately 1,627 students with 96.1% of its population being identified as socioeconomically disadvantaged and 94.5% Latino. Furthermore, the school is home to 23.8% English learners. The school has recently been approved to become an International Baccalaureate World School, a prestigious program that exemplifies rigor and academic excellence.

While the District is making sure that students have the support and resources needed to be academically successful to graduate from high school, they are also providing a seamless transition to college through a strong partnership with Santa Ana College.

“The Santa Ana Unified School District has some of the best and brightest students in Orange County who are eager to learn and maximize their full potential,” said Dr. Stefanie Phillips, Superintendent of the Santa Ana Unified School District. “We have amazing programs and resources that are specifically designed to prepare our students for college and careers. Our steady climb in our graduation rates is evidence of our commitment to academic excellence.”

The District attributes the increased graduation rates to a collaborative effort districtwide and multi-faceted approach that includes:

The Santa Ana Unified School District is the seventh largest district in California and the largest in Orange County. The district serves the educational needs of nearly 53,000 students in prekindergarten through twelfth grade. Ninety-six percent of SAUSD students are Latino.