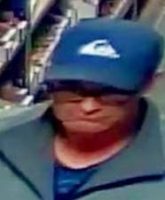 On 06/10/2016 at approximately 9 a.m. the photographed suspect took several items from the business without paying for them. He was then confronted by store employees and the suspect used force to flee the scene. The suspect fled the scene in a 2015 – 2016, black Mazda6 with paper plates from “Patterson Huntington Beach.” Anyone with information about the suspect is asked to please contact the Santa Ana Police Department Robbery Unit, Detective Cpl. A. Silva at (714) 245-8545,asilva@santa-ana.org or Orange County Crime Stoppers at 1-855-TIP-OCCS.