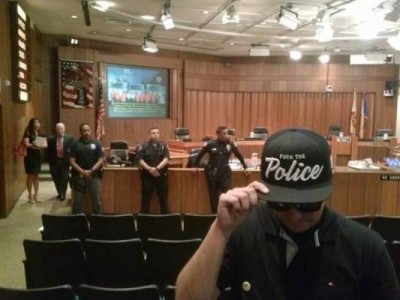 These actions were clearly premeditated.  The ruckus actually began over a month ago at a previous Council meeting when Mayor Miguel Pulido was upset that while he was trying to give service awards to two Santa Ana police officers there were protestors seated in the Council Chambers holding “f*ck the police” signs.  No one on the City Council said or did anything about that and in fact they all ignored the police too.  Pulido was the only one who congratulated them on their awards.  The meeting left a very negative impression on the members of the Santa Ana Police Officers Association and their President, John Franks, later sent a stern letter to the City Council announcing that unless they could control what happened at their meetings he would not allow his officers to receive awards in Chambers but instead they would be given out at the SAPD headquarters. END_OF_DOCUMENT_TOKEN_TO_BE_REPLACED