This Saturday’s Santa Ana Art Walk, on Nov. 5, might be the biggest one ever.  Not only does it coincide with the 9th Annual Noche de Altares (Dia de Los Muertos/Day of the Dead) event, we are also going to see the Occupy Santa Ana movement conduct a protest at 1:00 in front of the Bank of American on 4th and Main, for Move your Money Out Day.  (B of A announced today that they are cancelling their monthly debit card fee increase, so perhaps folks won’t be moving their money out after all).

The Occupiers are then  having a march from 6:30 to 8 through Downtown Santa Ana, where the Day of the Dead Altars will be set up, and then on to the Artists Village.  They will end the march at the Santora Building, at the Studio del Sotano, with a Sangria party. END_OF_DOCUMENT_TOKEN_TO_BE_REPLACED 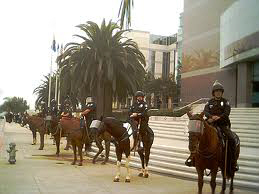 Occupy Orange County is leaderless resistance movement in solidarity with Occupy Wall Street with people of many colors, genders and political persuasions. The one thing we all have in common is that We Are The 99% that will no longer tolerate the greed and corruption of the 1%. We are using the revolutionary Arab Spring tactic to achieve our ends and encourage the use of nonviolence to maximize the safety of all participants. Join us in occupying Orange County, CA on October 22nd 2011 at the Ronald Reagan Federal Building in Santa Ana. We are the 99% and we DO exist in Orange County. END_OF_DOCUMENT_TOKEN_TO_BE_REPLACED