This year’s Boca de Oro Festival of Literary, Visual and Performing Arts, which usually brings together thousands of artists, students, educators and attendees to Downtown Santa Ana, will take place online with over 100 free performances and virtual sessions.

Revelers of culture and enthusiasts of the arts will enjoy this year’s open exploration of how we build our cities and lives through our collective memories, dreams and visions.

Pete Souza, a principle White House Photographer under President Obama and President Reagan, will open our conversation with his “Eyewitness to History” observations on who we are as a country. Souza is the subject of the hit Netflix Documentary, “The Way I saw It” and his national voice will anchor the importance and timeliness of our community’s discussion.

The festival will conclude on Sunday with “The Arc of Systemic Solidarity,” a vision put forth by prophetic Haitian-American poet, Marc Bamuthi Joseph. The artist, citizen philosopher, educator and Vice President of Social Impact at the Kennedy Center will articulate how we collectively design a future of “inspiration for us all.”

In-between the two keynotes, over 150 local and regional voices will present exhibitions across the arts in writing, puppetry, dance, film, music and scoring, murals, musicals, history, speech and politics, theatre and creative placemaking.

Attendees can sign-up free at BocaDeOro.org. After providing their name and e-mail address, they can choose from over 100 sessions occurring virtually online over the three day festival.

Boca de Oro Festival was built as an annual Downtown Santa Ana event to primer the unique, historic and mixed character of downtown as a canvas for the palette of local, regional and national voices who have participated over the last five years. This year’s special online version is a departure from the festival’s original intent, but #BOCA2021 has adapted and thrived in the digital medium. We hope that you will join us this year and that we will hopefully see you next year in-person in #DTSA.

The first Boca de Oro Book Fair was on March 7th 2020, One week later the COVID-19 Shut downs happened. This was the last public event they had in Downtown Santa Ana in 2020. They are not going to let COVID-19 stop them from spreading their love of literacy in our communities. This is why they are moving from the Boca de Oro Book Fair to Lending Libraries this year. This is how they will bring the book fair to every neighborhood in Santa Ana. This is how our neighborhoods can help all the youth still stuck at home with remote learning by sharing your favorite novels that are sitting around the house collecting dust with one another in this local book exchange.

If you are interested in this free Lending Library in your neighborhood please contact Madeleine Spencer at mspencer@sabcinc.com or call at 714-815-2653.

This year’s expanded programming at various downtown sites will include a strong lineup of student performances across all disciplines to showcase the many arts-related programs offered throughout SAUSD.

SAUSD will also be involved in a range of activities during the event.

Where: Locations throughout Downtown Santa Ana

The event, which will take place from 10 a.m. to 10 p.m., brings 100 authors and poets and 3,000 visual and performing artists to downtown. This year’s theme, “The Spirit of Transformation” with the nine Greek muses, was illustrated in a stunning poster by Santa Ana illustrator and artist Barbie Godoy.

With an expected attendance of 7,000 people – many of whom are families with young children – Boca de Oro has expanded its programming with a K-5 Arts Festival put on by Oasis Center International and a Scholastic Book Fair at Birch Park. Santa Ana College is presenting big band performances, children’s theater, poetry readings, as well as theater and media arts. Visitors can ride a complimentary trolley to visit the various locations hosting performances across all creative disciplines in literature, dance, theatre, speech and music.

The Santa Ana Business Council and Santa Ana Unified School District are the lead organizers of Boca de Oro, in partnership with Santa Ana College and the City of Santa Ana. The nonprofit group Community Engagement has been a sponsor for the past two years, and new partner Oasis Center International has joined this year.

The Santa Ana Elks Lodge, which also is providing a sponsorship, will do a reading at the festival and will give out 150 free books to children. Newport Friends of the Library donated books that will be given away for a dollar a bag at the West End Book Fair.

Among the many authors on hand is Keynote Speaker Zara Raheem, author of “The Marriage Clock” – named a “must-read book of the summer” by Cosmopolitan, POPSUGAR, Bustle and Book Riot. Festival attendees also will have the chance to meet and hear from Cuban poet Susannah Rodriguez Drissi; Marytza Rubio, founder of the Makara Center for the Arts; and Hugo Award winner Foz Meadows, along with many other inspiring local, regional and visiting authors.

A Boca de Oro app will be released on iTunes and GooglePlay so everyone can discover, plan and track events. 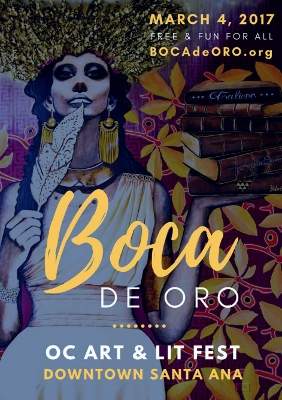 Downtown Santa Ana invites Authors to Take Over Their City

SANTA ANA, Ca — On Saturday March 4th, Downtown Santa Ana will be transformed into the Literary Capital of Orange County. Over a dozen art galleries, restaurants, historic buildings and secret spaces will double as houses of letters for literary fans to connect with local and regional writers.

“Our region is a wealth of writers and readers,” said Madeleine Spencer, festival organizer and downtown business leader. “We opened our downtown campus to celebrate local literati, and curators seized the opportunity.” END_OF_DOCUMENT_TOKEN_TO_BE_REPLACED