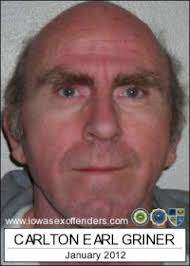 *The underage girl was an undercover officer

WESTMINSTER – A registered sex offender was sentenced today to three years in state prison for arranging to meet an underage girl for sex through Craigslist. Carlton Earl Griner, 56, Garden Grove, pleaded guilty today to one felony count each of contacting a child with intent to commit a lewd act, meeting a minor with intent to engage in lewd conduct, and attempted lewd act upon a child under 14 years old. Griner was also required to register as a lifetime sex offender in California based on his prior conviction of possessing child pornography in Iowa.

On Jan. 9, 2013, Griner made arrangements with the undercover officer to meet at a shopping center. He drove to the meeting location with the intent to have sexual contact with the “13-year-old girl.” Upon arrival, HBPD officers arrested the defendant.

Griner’s lifetime registration as a sex offender bars him from entering County recreational areas and City parks which have passed the Sex Offender Ordinance. Visit www.orangecountyda.com to read the prior press releases on the County’s Sex Offender Ordinance as well as the 14 other cities that have enacted the Child Safety Zone Ordinance.