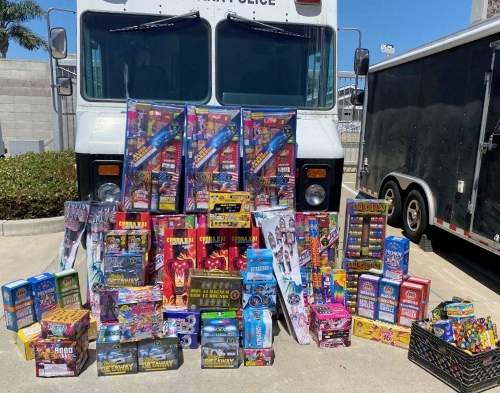 It makes sense when you think about it. The local gangbangers have gotten pretty good at distributing meth and other drugs in Santa Ana. Why wouldn’t they use that business acumen to make a fortune selling illegal fireworks to our residents as well?

It turns out that is exactly what the gangs are doing, all over California. Even worse they are using the money they make importing and selling illegal fireworks to pay for the guns they use to commit crimes. Those guys by the way are increasingly ghost guns, made with 3-D printers. Such guns are unmarked and untraceable.

The gangbangers are buying the illegal fireworks in Nevada and in Mexico then stashing them in their cars and slipping them past our borders.

Illegal fireworks also enter into California through the port of Long Beach from Mexico and China and are ostensibly headed out of state to be sold legally, but some somehow never make it to their intended destinations. These fireworks are then sold online, in parking lots and from warehouses at double or triple their cost, according to the O.C. Register.

These illegal fireworks are not safe. Every year dozens of Californians blow off their fingers and/or hands. Sometimes large quantities of fireworks blow up in the homes they are stored in, presenting a distinct hazard to our neighborhoods. That is not to mention the fire risk in a state that is bone dry.

The officials cannot stem the tide of illegal fireworks in California. It is up to you! Stop buying the illegal fireworks and encourage your friends and family to do the same. Don’t provide money to the gangs so they can turn around and buy more guns!