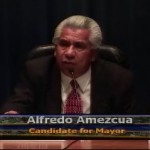 The ballots have been cast and the votes tallied and Santa Ana voters sent a message that was loud and clear.  The people of the “Golden City” soundly reject Alfredo Amezcua and his followers made up of the “usual suspects”, the “Coalition of No” and the unhinged like Art Lomeli.   Yes the overwhelming victories by Mayor Miguel Pulido and Councilman Sal Tinajero demonstrate that the so-called “revolution” in Santa Ana existed only in the Amezcua echo chamber.

Amezcua ran an attack filled campaign that failed to ever demonstrate a vision or a plan for the future and his message or lack thereof failed to resonate with the voters.  Amezcua tried to portray himself as the outsider fighting for the little guy.  His followers tried to paint him as Pancho Villa or Che, but in reality he was nothing more than a Benedict Arnold.

Amezcua was the consumate city hall insider.  He did not break with Pulido until the Mayor smartly refused to take part in Amezcua’s failed banking scheme and until Pulido shook himself free of the “usual suspects”.  Amezcua eagerly welcomed top tier, front line “usual suspects” like Tim Rush, Debbie McEwen and the Stroud’s to his campaign.  Despite portraying himself as the champion of the downtrotten, he alligned himself with the very folks who have sought to screw the poor immigrant community time and again.

One thought on “Santa Ana voters reject Amezcua, the Usual Suspects and the Coalition of No”