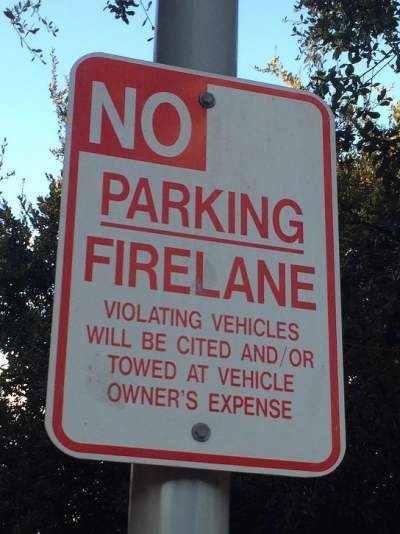 Reyna, who is up for reelection this year, previously served on the SAUSD School Board – and he once worked for the Santa Ana Parks and Recreation Agency. So one would hope that he knows better than to endanger the lives of Santa Ana’s students by parking in fire lanes and blocking fire hydrants in front of our schools.

Is it possible Reyna didn’t notice what he was doing? Consider that:

Why did Reyna illegally parking his personal vehicle in a clearly marked FIRE LANE and within 15 feet of a fire hydrant in front of Godinez High School?

Perhaps Reyna, who dropped out of high school and can’t seen to find a full time job to supplement his part-time City Council position, is unaware that:

22500.1.  In addition to Section 22500, no person shall stop, park, or leave standing any vehicle, whether attended or unattended, except when necessary to avoid conflict with other traffic or in compliance with the directions of a peace officer or official traffic control device along the edge of any highway, at any curb, or in any location in a publicly or privately owned or operated off-street parking facility, designated as a fire lane by the fire department or fire district with jurisdiction over the area in which the place is located.

The designation shall be indicated (1) by a sign posted immediately adjacent to, and visible from, the designated place clearly stating in letters not less than one inch in height that the place is a fire lane, (2) by outlining or painting the place in red and, in contrasting color, marking the place with the words “FIRE LANE”, which are clearly visible from a vehicle, or (3) by a red curb or red paint on the edge of the roadway upon which is clearly marked the words “FIRE LANE”.

22514.  No person shall stop, park, or leave standing any vehicle within 15 feet of a fire hydrant except as follows:

(a) If the vehicle is attended by a licensed driver who is seated in the front seat and who can immediately move such vehicle in case of necessity.

(b) If the local authority adopts an ordinance or resolution reducing that distance. If the distance is less than 10 feet total length when measured along the curb or edge of the street, the distance shall be indicated by signs or markings.

By the way this incident is a good reminder that our City Council members are ripping us off! Do you know any other part time employees who get new BMWs – paid for by the taxpayers? Or who don’t pay their parking tickets (see the graphic above). That is not enough for Reyna however as he and his City Council cronies placed Measure PP on the ballot. Measure PP is designed to give the City Council members a 700% raise – if the voters are dumb enough to vote for it. It goes without saying – vote No on Measure PP!

What we need is a City Council that will serve the people – not themselves! I hope the next City Council majority will repeal their ridiculous car allowance.

As for Reyna, please vote for his opponent, Juan Villegas. I can assure you that Villegas, who has over 25 years experience in law enforcement, won’t be parking in fire lanes and blocking fire hydrants.