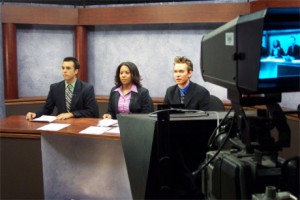 No previous broadcasting experience is necessary and anyone interested is required to enroll in SAC’s Television/Video Communications 131: Summer Broadcast News Workshop. Behind-the-scenes crew members and on-camera talent are needed for the dual English and Spanish productions seen weekly on Time Warner Cable and on Facebook. Candidates need to be available Tuesdays and Thursdays from 11:00 a.m. to 2:00 p.m. from June through mid-August when the shows are produced.

“This year we salute our over 500 alumni of the newscasts including Will Ferrell who will be appearing in his second parody of what he learned in class, ‘Anchorman II,’” said Terry Bales, SAC TV/Video chair.

In its 29th year, AAOC is the oldest, continuous running cable show in Orange County. Among the program’s alumni are Lindsay Casinelli, who recently won an Emmy Award for her work with Univisión Deportes, and Joe Rodriguez, producer of international soccer for Fox Sports who is preparing to cover the World Cup soccer matches in Brazil.

« Enjoy $1 Tacos at the Green Parrot Villa’s Taco Tuesday Happy Hour
So what do you think of the O.C. Register’s paywall? »