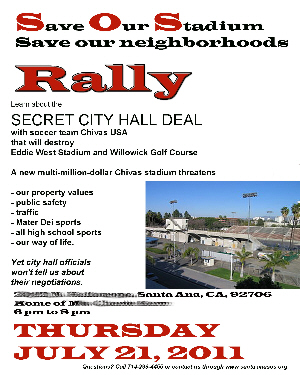 Why would the Chivas USA move here when they have a first-class arena in Carson?

That isn’t stopping the Usual Suspects however from ranting and raving.  Here is what they had to say on their latest flyer: the proposed Chivas soccer stadium will threaten “their way of life.”

Check out these excerpts, with sources noted, of Klansmen of old referring to their “way of life:”

Let’s face it – these haters are bashing the Chivas USA because their real issue is Mexicans.  It always has been.  If anything these folks have become even more inflamed since Mexican Americans took over the Santa Ana City Council (with the exception that Council Member Vince Sarmiento is of South American heritage).

I hope the proposed Chivas USA stadium DOES get built at Willowick Golf Course.  It probably won’t, but if it did it would be a huge economic boon to our city and a source of immense civic pride – except for those who are carrying on the ways of Dr. Head and his good old boys…

UPDATE: The woman who hosted the anti-soccer Klan of Usual Suspects meeting called the FBI and the SAPD today to complain that we had posted her name and address – even though that information appeared on the flier for the event that was widely distributed.  The SAPD asked me to consider taking the info down and I did – although it is still up on the website of the haters in question, which you can read by clicking here.