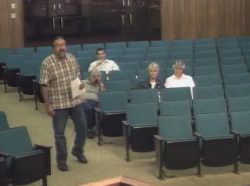 Certain behavior can be legal, yet also be uncouth.  That is the conundrum that the Santa Ana City Council is struggling with.

I looked at the Brown Act and sure enough, it seems that Castillo and Moreno have a right to misbehave during public commments.  Here is the law in question:

So yes, these folks can disrupt the meeting during their comments, with personal attacks.  But is that a good thing?

Castillo also disrupted a meeting recently by standing up, while in the audience, and trying to shout out over the Council Members.  (See the picture atop this post).  That is illegal and he should have been arrested.

I can understand why Alvarez and company dislike getting ripped, but in this instance the legal precedent is clear.  That said, the broader question is should our residents engage in such behavior?  Does it really move the agenda?  Or is it just a waste of our time?

Hardly anyone goes to the meetings.  They are streamed online and televised on cable, but are not provided in an online archive.  You have to rent DVDs with meetings recorded on them, at the Main Library.

Castillo is not the only Amezcua supporter acting like a thug.  I am disappointed by their behavior, in general.  I have been attacked by several of them even though I am officially neutral and am not supporting anyone for Mayor, yet.

That said, free speech laws are pretty specific.  These people are embarrassing but they have a right to spout off during public comments.  The rest of us may continue to ignore them, as is our right.

« Why are other school districts offering more online parent resources than the SAUSD?
Amezcua wants free speech, but not when it comes to student commissioners »

2 thoughts on “Residents can say rude things at City Council meetings, but should they?”