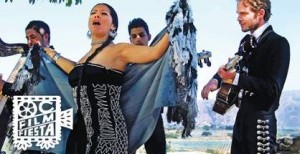 The Film Fiesta continues on Sat., Sept. 7 with a free 1pm screening of Our Nixon, a new documentary comprised of Super 8 footage shot by H.R. Halde¬man, John Ehrlichman and Dwight Chapin that was seized by the FBI during the Watergate investigation, filed away and forgotten for almost 40 years!

Then, celebrate the 50th anniversary of Dr. Martin Luther King Jr.’s “I Have a Dream” speech with a special 3pm screening of award-winning filmmaker Kevin McKiernan’s new documentary Bringing King to China, which deals with McKiernan’s daughter’s attempts to mount a play about Martin Luther King in China at the onset of the Iraq War. Kevin McKiernan will be in attendance for a special Q&A following the film.

The Film Fiesta is also proud to announce the Southern California Premiere of Radio Free Albemuth, a new film based on the novel by legendary science fiction author and former OC resident Philip K. Dick, whose novels have been adapted into such films as Blade Runner, Total Recall, A Scanner Darkly and Minority Report. Director John Alan Simon will be present for a Q&A after the screening. The Film Fiesta’s Science Fiction Spotlight feature a great selection of films, including the 1967 Mexican classic El Santo vs. la invasion de los marcianos; La Antena, Esteban Sapir’s modern Argentine silent expressionist film; and a rare widescreen presentation of the 1984 sci fi classic The Adventures of Buckaroo Banzai Across the 8th Dimension with a special Q&A with actor Pepe Serna (Scarface, American Me, Car Wash), who plays Reno Nevada in the film.

Presented by the city of Santa Ana, PRCSA, the OC Film Fiesta is a free cinematic celebration of Orange County’s multicultural heritage that runs from Sept. 6-15. Launched in 2010, the OC Film Fiesta adds to the cultural vitality of downtown Santa Ana, promotes community involvement and deepens relationships with local cultural groups, businesses, colleges and the film industry. The Film Fiesta takes place in conjunction with the annual Fiestas Patrias celebration, which occurs on Sept. 14-15 and draws 250,000 attendees to downtown Santa Ana. Screenings are free and open to the public.

For more information to request an interview, email info@ocfilmfiesta.org. The 2013 Film Fiesta Schedule, including film descriptions and trailers, is online at www.ocfilmfiesta.org.

« Rallies set to demand justice for Jesus Aguirre, on Sep. 26 in Santa Ana
There were 23 crimes reported in Santa Ana on Wednesday, Sep. 4 »