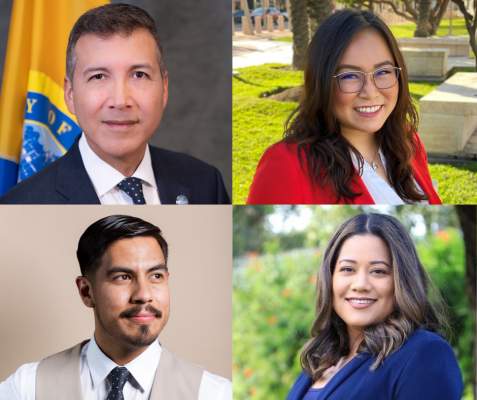 The installation took place during a virtual special City Council meeting with a prerecorded Oath of Office and video celebration highlighting messages from the new City leaders, words of congratulations from their supporters and community members, and a musical tribute from the Santa Ana Unified School District arts program.

Mayor Sarmiento is believed to be the first Bolivian American Mayor in the United States and Councilmember Phan is the City’s first Vietnamese American Councilmember.

Mayor Sarmiento noted that he and the three new Councilmembers were all either born or raised in Santa Ana.

“We are literally the sons and daughters of Santa Ana, genuinely home-grown products of the City,” he said.

Before being elected Mayor, Sarmiento served as a Councilmember from 2007 to 2020. He is an attorney who received his bachelor’s degree from UC Berkeley and his law degree from UCLA.

“Santa Ana is one of the largest cities in the largest state in our union,” Mayor Sarmiento said. “We must conduct ourselves as such and be bold in our aspirations but never again ignore the needs of those most vulnerable among us.”

Councilmember Phan was born near a refugee camp in Thailand after her parents fled the devastation of the Vietnam War. Her family settled in Santa Ana in 1989. A city attorney, she received her bachelor’s degree from UCLA and her dual law/master of public policy degree from USC.

“I know we have a lot of work ahead of us, whether it’s to address the COVID-19 pandemic and its effects on our community, addressing the homelessness crisis, or dealing with the lack of affordable housing, I know we’ll work together to arrive at positive solutions for all,” Councilmember Phan said.

Councilmember Lopez was born and raised in Santa Ana and attended local public schools. She received her bachelor’s degree from Cal State Long Beach and is a community health worker.

“When I decided to run for office, my desire was rooted in commitment of wanting something better for my neighbors as much as I wanted it for my own family,” Councilmember Lopez said. “I firmly believe that policy is a tool to implement equity on a systemic level.”

Councilmember Hernandez was born and raised in the Artesia Pilar neighborhood, is a product of Santa Ana Unified School District and graduated from Santa Ana High School. He is a community health worker who works with children and previously worked in gang prevention and reentry.

“I understand the excellence that exists within our community, and I plan on helping invest and develop more of it,” Councilmember Hernandez said. “From the rich cultural history, from the black community to the brown community to the API (Asian and Pacific Islander) community that have brought people together, I believe this community is a community that is worth investing in.”

The City Council installation and celebration video can be viewed at https://youtu.be/ZT5NE6x6vPA