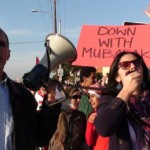 Our 2010 Santa Ana Man of the Year, Naui Huitzilopochtli, who now goes by Naui Tetl, has done it again.  This time he helped to organize a massive rally with over 200 protesters, in Anaheim, on behalf of the people of Egypt, who are fighting to get rid of their dictator, Hosni Mubarak.

“With the aid (the U.S. government) provide each year, we are funding a dictator,” said Naui Huitzilopochtli, 33, an activist from Santa Ana and one of the organizers of the march. “This shouldn’t be an Egyptian thing. Everybody should care about this issue,” according to the O.C. Register.

Click here to see more videos of the rally, shot by Naui.

In related news, Egyptian President Hosni Mubarak and his family have amassed a fortune estimated at $70 billion according to analysis by Middle East experts poll by the London Guardian. And very little of that stash is kept in his own country, they say. Much of his wealth is in British and Swiss banks or tied up in real estate in London, New York, Los Angeles and along expensive tracts of the Red Sea coast.  Read more on Newsmax.com: Mubarak Worth More Than $70 Billion.