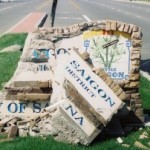 Our friends over at the Bolsavik blog have an interesting post on the candidacy of Ward 6 wannabe Nam Pham that expands on the Gustavo Arrellano’s story about Pham helping a group of “white residents” prevent an “all-Mexican” city council. Pham himself chose to comment on the post and it appears that race baiting isn’t the only reason he decided to run for the Santa Ana City Council seat.

You may or may not remember the “Welcome to Little Saigon” monument that was built in the traffic median near the corner of First Street and Euclid Avenue in the western edge of Santa Ana. The erection of the monument in 2002 caused a great deal of controversy amongst many in the city and was seen as our local elected’s such as then-councilmembers Jose Solorio and Brett Franklin pandering for support amongst the Vietnamese community.

In March of 2008, as I reported while writing for the Liberal OC, the sign was destroyed (see photo above) by a hit-and-run driver and never replaced. Most of the Santa Ana residents who I have spoken to that live in that area of town do not want the sign replaced and have expressed those sentiments to city hall. Apparently Nam Pham does not agree and he is running so that he can see to it that it is rebuilt.

« Amazing teacher quits the SAUSD and runs for the School Board as a write-in candidate
If All the Sky were Paper to debut at Chapman University on Nov. 11 »