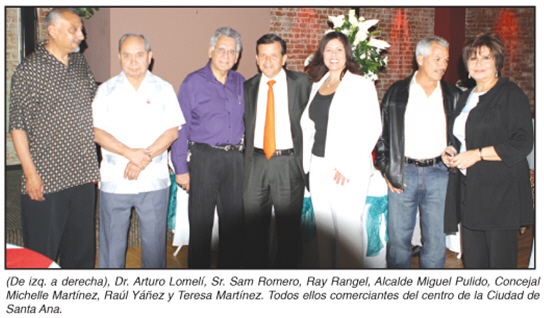 Picture Courtesy of the Miniondas Newspaper

This had to be an awkward experience for Lomeli, who is actively campaigning to oust Pulido and replace him with local attorney Alfredo Amezcua.  Another merchant who was at the meeting, Sam Romero, is also part of Amezcua’s “SACrED” organization.

This year’s Santa Ana Cinco de Mayo festivities will start on Saturday, May 1, and continue on May 2.

So why is Cinco de Mayo important both to Mexicans and to Americans?  Here is a great summation of the history of Cinco de Mayo:

The 5th of May is not Mexican Independence Day, but it should be! And Cinco de Mayo is not an American holiday, but it should be. Mexico declared its independence from mother Spain on midnight, the 15th of September, 1810. And it took 11 years before the first Spanish soldiers were told and forced to leave Mexico.

So, why Cinco de Mayo? And why should Americans savor this day as well? Because 4,000 Mexican soldiers smashed the French and traitor Mexican army of 8,000 at Puebla, Mexico, 100 miles east of Mexico City on the morning of May 5, 1862.

The French had landed in Mexico (along with Spanish and English troops) five months earlier on the pretext of collecting Mexican debts from the newly elected government of democratic President (and Indian) Benito Juarez. The English and Spanish quickly made deals and left. The French, however, had different ideas.

Under Emperor Napoleon III, who detested the United States, the French came to stay. They brought a Hapsburg prince with them to rule the new Mexican empire. His name was Maximilian; his wife, Carolota. Napoleon’s French Army had not been defeated in 50 years, and it invaded Mexico with the finest modern equipment and with a newly reconstituted Foreign Legion. The French were not afraid of anyone, especially since the United States was embroiled in its own Civil War.

The French Army left the port of Vera Cruz to attack Mexico City to the west, as the French assumed that the Mexicans would give up should their capital fall to the enemy — as European countries traditionally did.

Under the command of Texas-born General Zaragosa, (and the cavalry under the command of Colonel Porfirio Diaz, later to be Mexico’s president and dictator), the Mexicans awaited. Brightly dressed French Dragoons led the enemy columns. The Mexican Army was less stylish. 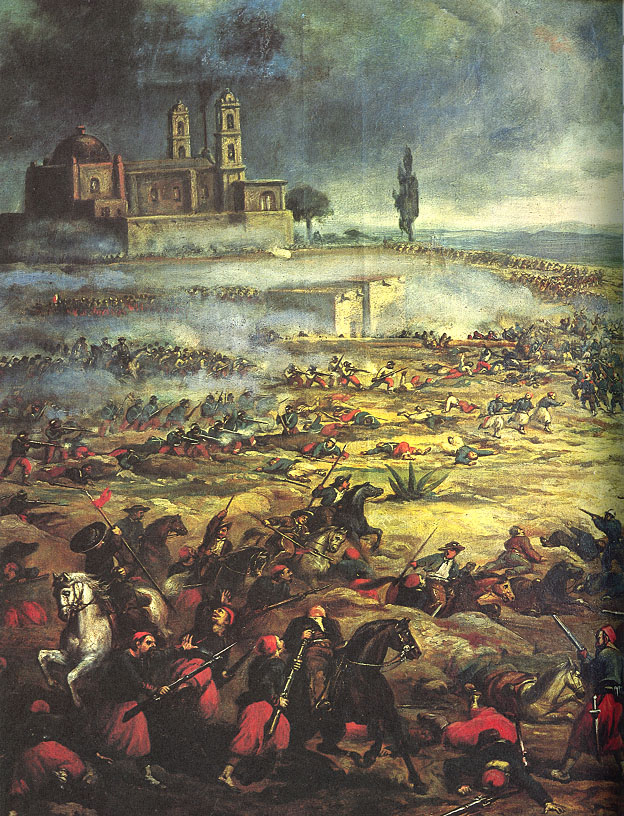 The Victory of Cinco de Mayo. In this painting, as the defeated French troops stream back from their failed assault, Mexican cavalry with lances pick off the stragglers. French troops of the elite 2nd Zouave Regiment, with their distinctive baggy red trousers, are in the foreground. The white gaiters or “spats” over their shoes are those that General Count de Lorencez ordered them to freshly whiten in order to impress the Mexicans in what he hoped would be his triumphal entry into Puebla. Meanwhile other French infantry, wearing white trousers, blue coats and fezzes, can be seen fleeing in the background.

General Zaragosa ordered Colonel Diaz to take his cavalry, the best in the world, out to the French flanks. In response, the French did a most stupid thing; they sent their cavalry off to chase Diaz and his men, who proceeded to butcher them. The remaining French infantrymen charged the Mexican defenders through sloppy mud from a thunderstorm and through hundreds of head of stampeding cattle stirred up by Indians armed only with machetes.

When the battle was over, many French were killed or wounded and their cavalry was being chased by Diaz’ superb horsemen miles away. The Mexicans had won a great victory that kept Napoleon III from supplying the confederate rebels for another year, allowing the United States to build the greatest army the world had ever seen. This grand army smashed the Confederates at Gettysburg just 14 months after the battle of Puebla, essentially ending the Civil War.

Union forces were then rushed to the Texas/Mexican border under General Phil Sheridan, who made sure that the Mexicans got all the weapons and ammunition they needed to expel the French. American soldiers were discharged with their uniforms and rifles if they promised to join the Mexican Army to fight the French. The American Legion of Honor marched in the Victory Parade in Mexico, City.

It might be a historical stretch to credit the survival of the United States to those brave 4,000 Mexicans who faced an army twice as large in 1862. But who knows?

In gratitude, thousands of Mexicans crossed the border after Pearl Harbor to join the U.S. Armed Forces. As recently as the Persian Gulf War, Mexicans flooded American consulates with phone calls, trying to join up and fight another war for America.

Mexicans, you see, never forget who their friends are, and neither do Americans. That’s why Cinco de Mayo is such a party — A party that celebrates freedom and liberty. There are two ideals which Mexicans and Americans have fought shoulder to shoulder to protect, ever since the 5th of May, 1862. VIVA! el CINCO DE MAYO!!