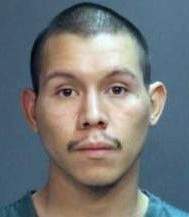 SANTA ANA, Calif. – A speeding driver was convicted yesterday and sentenced to 11 years in state prison for killing two people by crashing into their car after driving through a stop sign in Santa Ana. Jorge Ocampo, 24, Santa Ana, pleaded guilty yesterday, Aug. 4, 2016, to two felony counts of vehicular manslaughter with gross negligence, one felony count of hit and run with permanent injury or death, one misdemeanor count of driving without a valid license, and admitted to fleeing the scene after committing vehicular manslaughter.

At approximately 10:45 a.m. on Aug. 24, 2013, Ocampo drove at a high rate of speed and blasted loud music in an Audi sedan on Cabrillo Park Drive in Santa Ana. When he reached the intersection at Fruit Street, Ocampo failed to slow or stop at a posted stop sign and illegally drove through the intersection. He crashed into a Nissan sedan, which was legally making a left turn in the intersection.

Ocampo killed two victims, the driver of the Nissan, 54-year-old Alejandro Bravo, and 50-year-old passenger Juan Jose Luna Castro. Both victims died as a result of injuries sustained in the crash.

Ocampo left his vehicle at the scene and fled on foot. He failed to render any aid to the victims or notify police or paramedics about the crash. Ocampo was driving without a valid driver’s license.

Shortly before midnight on the night of the crash, Ocampo turned himself in to the Santa Ana Police Department, who investigated this case.

At Ocampo’s sentencing yesterday, members of the victims’ family delivered emotional impact statements to the court pursuant to Marsy’s Law. Castro’s family said in part, “You don’t know the pain we feel not getting a morning kiss before going to work from him and the phone call we would receive to let us know he was okay during the day. We all depended on him…” They went on to say, “When his grandchildren visit his grave, we get a knot in our throats when they ask why Papa is under the grass, it breaks our hearts when they wanna see him.”

Bravo’s daughter said in part, “My dad was the engine of the family. No matter what the situation he would always tell us to keep fighting, to always keep persevering and never give up… He was our Superman.” She continued on to say, “I wanted to pretend that this was a nightmare and that I would wake up to hear his voice… My father’s death changed me. It changed my son’s life. How do I explain death to a 5-year-old? I can’t. I don’t understand it myself.”