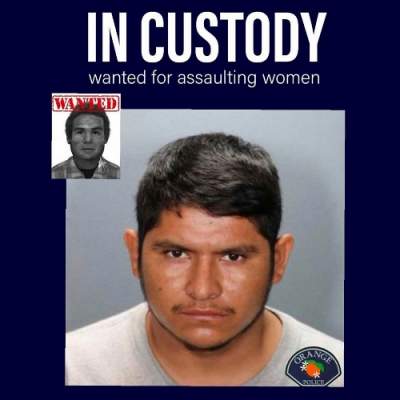 ANTA ANA, Calif. – A 21-year-old man has been charged with sexually assaulting four women along the Santiago Creek Trail in the City of Orange over the last few weeks. Authorities are asking for the public’s help in identifying additional potential victims.

He faces a maximum sentence of life in prison if convicted on all charges. He pled not guilty to all the charges today and is currently being held on $1 million at the Orange County Jail.

On August 12, 2020, at approximately 7:40 p.m., a woman was walking in the 4700 block of east Walnut Avenue when a man grabbed her buttocks and drove away on a bicycle. The woman called 911 and responding officers located a man matching the attacker’s description near Hewes Street and Center Avenue.  The man was arrested on suspicion of sexual assault and identified as Montiel-Tejeda.

On August 4, 2020 the Orange Police Department released a sketch of a man suspected in two separate sexual assaults of women in the City of Orange.

On July 25, 2020, at approximately 4:10 p.m., a woman was walking on the Santiago Creek Trail near Tustin Street and La Veta Avenue when a man grabbed her and pulled her into an alcove. The woman managed to run away and the man fled on a bicycle.

On August 2, 2020 a woman was exercising in Grijalva Park at approximately 6:35pm when a man walked up behind her, grabbed her buttocks, and rode away on a bicycle.

On August 9, 2020 a woman was walking on N. Tustin Avenue near Cambridge Street when a man grabbed her from behind and began pulling her backward. She managed to escape and he rode away on a bicycle.

“These brazen sexual assaults terrorized our community and had it not been for the tenacious police work to identify and arrest this predator there is little doubt that these attacks would have continued,” said Orange County District Attorney Todd Spitzer. “Thankfully he is now behind bars where he can no longer terrorize the community.”

Anyone with additional information is asked to call Orange Police Detective S. Costa at 714-744-7521.