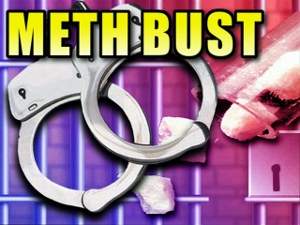 LOS ANGELES – As part of an international effort to disrupt narcotics trafficking on the darknet, special agents with U.S. Immigration and Customs Enforcement’s (ICE) Homeland Security Investigations (HSI) and members of the Los Angeles Joint Criminal Opioid and Darknet Enforcement (JCODE) Task Force announced charges Tuesday against a key member of a Southern California drug trafficking organization who allegedly distributed methamphetamine and other illicit narcotics to thousands of customers in at least 35 states and numerous countries around the world.

Earlier this year, five other members of the narcotics ring were arrested on federal charges, and authorities made substantial seizures of narcotics and cryptocurrency.

“Together with our partners, we remain at the forefront of combating narcotics trafficking, financial crimes and illicit activities purveyed by online black markets,” said David A. Prince, special agent in charge for ICE’s Homeland Security Investigations (HSI) in Los Angeles. “We have proven, once again, that these illicit activities on the darknet will not be tolerated in the United States. While criminal operators may continue to grow the reach of their businesses through these dark web marketplaces, the fact is that no matter how or where these crimes are committed, nothing is beyond the reach of the law.”

This case is part of Operation DisrupTor, which builds on the success of prior actions targeting darknet vendors, including the takedown of Wall Street Market, which was one of the world’s largest dark web marketplaces. Following the Wall Street Market takedown in May 2019 and the filing of federal charges in Los Angeles against the administrators, law enforcement in the United States and Europe obtained intelligence that allowed them to identify darknet drug traffickers.

“These online black market websites use a variety of technologies, including the Tor network and other encryption technologies, to ensure that communications and transactions are shielded from interception and monitoring,” according to court documents filed last week in Los Angeles.

A famous dark web marketplace, Wall Street Market, operated similar to legitimate commercial websites such as Amazon and eBay, but offered illicit goods and services” in exchange for virtual currencies, such as Bitcoin.

“Through the outstanding efforts of the JCODE Task Force, we have been able to unmask those hiding on the darknet, bringing to justice a wide array of criminals, including those operating online marketplaces, laundering cryptocurrency, and spreading drugs around the world,” said U.S. Attorney Nick Hanna. “My prosecutors and their JCODE partners will continue to rein in illegal dark web activities by disrupting other traffickers and those who help them access their illicit cryptocurrency.”

“American citizens endure the unfortunate consequences of darkweb marketplaces where criminals get rich by exploiting those suffering through an opioid epidemic while evading law enforcement scrutiny,” said John F. Bennett, acting assistant director in charge of the FBI’s Los Angeles field office. “This case and others should send a message that law enforcement has infiltrated the perceived anonymity of the darkweb and possesses the tools to identify and hold accountable individuals and groups responsible for illegal trafficking and the devastating toll it takes on humanity in the United States and abroad.”

“Members of the Stealthgod crew have discovered that not even the darknet could shield their criminal activities from the watchful eyes of Postal Inspectors and our law enforcement partners,” said Patricia Armstrong, inspector in charge of the U.S. Postal Inspection Service, Los Angeles. “The alleged drug traffickers miscalculated when they chose to use the U.S. mail to further their crimes, and they will face a very severe price.”

During Operation DisrupTor, the Los Angeles JCODE Task Force successfully dismantled a drug trafficking organization that used online monikers such as “Stealthgod” to sell methamphetamine and MDMA on multiple darknet marketplaces, including Wall Street Market. Investigators have linked the crew to more than 18,000 illicit drug sales to customers around the world. During an operation earlier this year, members of JCODE executed search warrants that led to the seizure of more than 60 parcels containing narcotics that were ready to be shipped to more than 35 states around the nation.

Members of JCODE arrested five defendants allegedly at the center of the “Stealthgod” organization and seized approximately 120 pounds of methamphetamine, seven kilograms of MDMA (“ecstasy”) and five firearms (photo of seizure) during law enforcement actions in the City of Los Angeles in February,. The five defendants arrested on federal charges are:

• Teresa McGrath, 34, of Sunland-Tujunga, who allegedly delivered dozens of narcotics-laden packages to a post office in Sunland;
• Rane Melkom, 35, of Sunland-Tujunga, who shared a residence with McGrath where authorities seized more than 50 pounds of methamphetamine, nearly 15 pounds of MDMA, approximately 30,000 Adderall pills, cash, and three loaded handguns;
• Mark Chavez, 41, of downtown Los Angeles, whose bedroom yielded nearly 40 pounds of methamphetamine and two handguns during a search in February;
• Matthew Ick, 51, of downtown Los Angeles, who is linked in court papers to a narcotics shipment to the organization; and
• Thomas Olayvar, 43, of downtown Los Angeles, who allegedly was involved in the shipment of narcotics through the United States Postal Service.

McGrath has pleaded guilty to conspiracy to distribute methamphetamine and MDMA, possession of a firearm in furtherance of drug trafficking, and cryptocurrency money laundering, admitting that over the course of about six months she received approximately $161,916 in Bitcoin and helped disburse this money to her co-conspirators.

Chavez has pleaded guilty to conspiring to distribute methamphetamine and MDMA, as well as possessing a firearm in furtherance of drug trafficking.

McGrath and Chavez are scheduled to be sentenced next year, when each will face a mandatory minimum sentence of 15 years in federal prison.
Melkom, Ick, and Olayvar face various narcotics charges alleged in criminal informations. These defendants are currently scheduled to go on trial next year.

The cases stemming from the investigation into the “Stealthgod” organization are being prosecuted by the U.S. Attorney for the Central District of California’s International Narcotics, Money Laundering and Racketeering Section.

As the investigation into the “Stealthgod” crew continued, the Los Angeles JCODE Task Force made additional seizures, including $1.6 million in cryptocurrency, three firearms, 11 pounds of methamphetamine and 14 pounds of pills pressed with methamphetamine.

In addition to the Operation DistrupTor cases related to “Stealthgod,” federal prosecutors in Los Angeles have filed cases against other alleged darknet narcotics traffickers and those who help them convert bitcoin into fiat currency. For example:

• Kais Mohammad, 36, of Yorba Linda, is scheduled to plead guilty on Thursday to federal charges stemming from the operation of 17 Bitcoin kiosks across Southern California. In his plea agreement, Mohammad admitted that he knew that at least one of his clients was engaged in illicit activity on the dark web.

Earlier this year, three people linked to the online moniker “Aeirla” were sentenced to federal prison for conspiring to distribute methamphetamine and cocaine to customers who negotiated transactions on the darkweb.

Pham sold pound quantities of methamphetamine on the darknet, while Gifford and Gallardo packaged them – in toys, a beach ball, and boxes of Christmas cards and chocolates – and shipped them to customers nationwide.

Five defendants are scheduled to be tried in October 2021 in U.S. District Court in Los Angeles on various narcotics trafficking charges that allege they used the monikers “Drugpharmacist” and “RickandMortyShop” to sell cocaine, heroin, methamphetamine and crack cocaine on Wall Street Market and another darknet marketplace called Dream. Members of the conspiracy allegedly shipped narcotics in small vials concealed inside stuffed animals.

The defendants scheduled to go on trial are: Jerrell Eugene Anderson, 30, of Inglewood; Christopher Canion Van Holton, 33, of Valencia; Adan Sepulveda, 28, of Lancaster; Kenneth Lashawn Hadley, 33, of Lancaster; and Jackie Walter Burns, 22, of Lancaster. Anderson and Sepulveda face a charge of distribution of heroin resulting in death in relation to a shipment of heroin to a customer in Knoxville, Tennessee, who suffered a fatal overdose.

• Kunal Kalra, 26, of Westwood, was sentenced in March to 18 months in federal prison after pleading guilty to federal narcotics and anti-money laundering charges related to his unlicensed money transmitting business that he used to exchange virtual currency for cash for darknet vendors. This matter was the first federal case in the nation charging an unlicensed money remitting business that used a Bitcoin kiosk.
• A father and his son who distributed methamphetamine on the darknet using monikers such “Quartersandup,” “Tenderwoodcock,” “Colsandersdream,” and “colonelsanders” were sentenced to federal prison last year. William Glarner III, 65, of Huntington Beach, was convicted at trial and sentenced to 15 years. His son, William Glarner IV, 35, of Irvine, pleaded guilty and was sentenced to 10 years.
• Tyler Reeves, a 30-year-old Irvine man who sold narcotics on Wall Street Market under the moniker “Platinum45,” was sentenced last year to 10 years in federal prison.

The “Stealthgod” cases are the result of an investigation by the Los Angeles JCODE Task Force, which is comprised of several federal agencies, including HSI, the FBI and the U.S. Postal Inspection Service.

The darknet investigations discussed in this announcement were prosecuted by the U.S. Attorney for the Central District of California and conducted with the support of the Organized Crime Drug Enforcement Task Force (OCDETF).