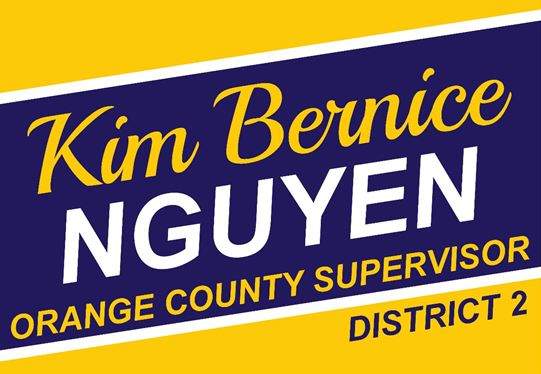 Garden Grove, CA — Garden Grove Councilwoman Kim Bernice Nguyen today announced her candidacy for the Orange County Board of Supervisors, District 2, as well as a strong and diverse list of endorsements from across Orange County.

At a time when voters are frustrated with the County’s handling of the ongoing COVID-19 pandemic, Councilwoman Nguyen brings a much needed public health background, having formerly worked for CalOptima and now as a Senior Health Care Analyst for a large health plan.

“We need a bold voice at the County that understands the issues of working families,” Nguyen said in a statement. “I know the struggle of working multiple jobs to make ends meet while attending school and the frustrations of high rent and skyrocketing housing costs. As a lifelong resident of District 2, I’ve watched as the County failed to address our housing crisis, leaving many, especially in my generation, priced out of a home. At the same time, the County has turned a blind eye to our homelessness crisis, creating a public health and safety emergency. I’ve never shied from a fight and will work toward solutions to our toughest problems, it’s what I’ve done as a Councilwoman, it’s what I do everyday as a health care analyst, and it’s what I will continue to do as your Supervisor.”

Re-elected in 2020 with over 70% of the vote, Kim Nguyen is a first-generation Vietnamese and Mexican-American Councilmember in Garden Grove and was the first Latina and youngest person ever elected to the city in 2016. She has already secured endorsements from a diverse coalition of elected officials throughout Orange County. Endorsements from representatives within the Supervisorial District include: Garden Grove Councilmember John R. O’Neill, Garden Grove Councilmember Diedre Thu Ha Nguyen, Santa Ana Councilmember Thai Viet Phan Santa Councilmember David Penaloza, Tustin Councilwoman Letitia Clark, Santa Ana Unified School Board Member Valerie Amezcua, and Orange Unified School Board Members Ana Page and Kris Erickson, among others.

A lifelong resident of District 2, Councilwoman Nguyen attended Clinton-Mendenhall Elementary, Doig Intermediate, and Santiago High School. She graduated from the University of California Santa Cruz with a degree in politics and a minor in legal studies. She is the first in her family to graduate high school and receive a college degree.

The 2nd Supervisorial District includes the cities of Santa Ana, portions of Anaheim, Garden Grove, Orange and Tustin. Voters 18-35 comprise the largest age bloc, with over 41% of the district’s registered voters. Democrats outnumber Republicans by nearly 20 points — making it one of the most competitive local races in California.

(Alphabetical order by jurisdiction, titles for identification purposes only)