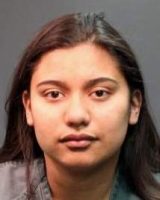 The man who was arrested early this morning by the SAPD after he barricaded himself inside a home at the 2200 block of South Oak St. has been identified as Victor Manuel Ramirez, 21, of Santa Ana, according to the O.C. Register.

Three other people were arrested in connection with the incident including: Ramirez was booked into the Santa Ana Jail on several weapons and gang-related charges and because he was a parolee at large.

The barricade incident was a major inconvenience to the neighbors who were temporarily evacuated from their  homes.