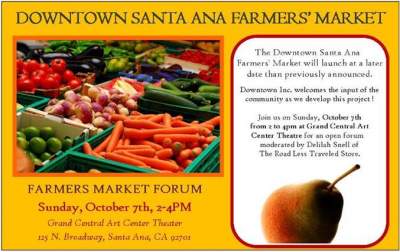 “A community forum Oct. 7, from 2 to 4 pm, in Santa Ana’s eclectic Artists Village could be an important litmus test for whether the controversial booster organization Downtown Inc. can mend fences with a group of artists and nonprofit organizations that have grown increasingly bitter about the agency,” according to the Voice of OC.

Once again Downtown, Inc. has stepped in it.  They proposed a Farmer’s Market to be held at night, during the monthly Art Walk, for Chefs, and disregarded advice from Lara Montagne, the Co-Founder and Executive Director of the Santa Ana Certified Farmers’ Market.  Here is what she had to say about this latest DTI marketing disaster:

The Grain Project has actually tried to share a proposal with DTI on various occasions, but have been shut out.

After learning of DTI’s history of accepting proposals from the community on various events and then taking the free detailed info to instead create their own competing events, I decided not to leave our proposal in their hands for legitimate fear of co-opting.  I was happy to discuss it with them and show them the proposal in person.  I was happy to give them the benefit of the doubt, despite the shocking and sad stories I was hearing of not only their lack of support of other community organizations putting on events in the downtown area, but direct competition with them.  I was hoping we could figure out a way to collaborate on an exciting new farmers’ market that could become what the previous one should have been had we not had to face so many unnecessary challenges and roadblocks put forth by the City at the time.   We believe that changed city leadership and an increased interest on the part of the community as a whole will help to make the future Santa Ana Certified Farmers’ Market (SACFM) what the previous one could and should have become.

I said it to Ms. Baxter years ago and I still feel that a healthy farmers’ market (and our desire for the future Santa Ana Certified Farmers’ Market) is one that would attract chefs, foodies, and affluent customers in addition to providing access to healthy, fresh produce to the low-income community and everything/everyone in between.  It would have been great to have a collaborative discussion with Ms. Baxter on ways to attract and support the spectrum of customers and vendors, except she failed to show up for our scheduled meeting.

I continue to stress (for years now) that the Market should not be a program of a sole organization or group, but instead a collaborative effort of the entire community, including our City government, and yes, even the folks who are doing their best to spread misinformation about me, the SACFM, and TGP.

Oddly, for their ‘community forum’ tomorrow, MANY community members, groups, and organizations who serve thousands in the community, including The Grain Project, have not been reached out to to be part of the conversation tomorrow.  It’s obvious DTI is not interested in what the entire community thinks, but rather are attempting to make it appear so.

Thanks for your input, Jane, but please do remember to seek and state facts rather than perpetuate rumors and inaccuracies.

« Fights, arts, crafts, reptiles and holiday fun at the OC Fair Center
Sanchez and Correa endorse Tinajero for the SAUSD School Board »

26 thoughts on “Downtown Inc. steps in it again with Farmer’s Market idea”