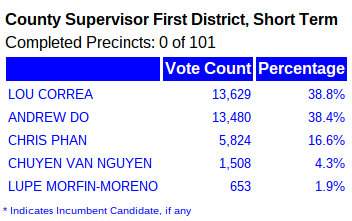 Garden Grove Councilman Chris Phan is in a distant third place with only 5,824 votes.  While he did a lot of walking he didn’t get in the mailboxes and that is crucial in low turnout special elections.

The two bogus candidates – Chuyen Van Nguyen and Lupe Morfin-Moreno, came in at the bottom of the early results.  Morfin-Moreno, a Mexican who hates Mexicans, came in dead last with 653 votes.

If Do loses in a squeaker it will be because he had no grassroots support – just a lot of mail.  And he wasn’t able to overcome a three-way Viet vote split.

However it is early yet – and while the early absentee votes have been counted there are still many ballots to go.