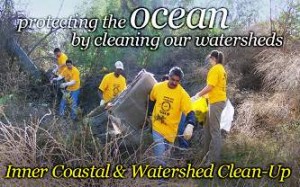 The Seventeenth Annual Inner-Coastal Watershed Clean-up Day is set for September 21, 2013, between 9 am and 12 pm, at Santiago Park. Registration begins at 9am at the Santiago Park Nature Center, which is located off of Memory Lane, a few blocks east of Main St., not far from the CityPlace and the MainPlace Mall, in Santa Ana.  This event is sponsored by Trails4all.org.

A garbage patch estimated to be larger than the state of Texas is floating in the Pacific Ocean. Many animals eat this trash by mistake, or feed it to their young, killing countless sea turtles and birds each year.

The California Coastal Commission estimates that 60 to 80 percent of this trash was discarded far from the coast— out car windows and onto the sidewalks of our communities— before being carried to the ocean by storm water drains and rivers, polluting the environment along the way.

In 1997, Trails4All started to become part of the solution, when it hosted its first Inner-Coastal & Watershed Cleanup Day in connection with the California Coastal Commission’s California Coastal Cleanup Day, the largest volunteer event in California. The event helps clean beaches and oceans by removing trash from inland creeks and rivers, and helping to prevent future pollution through public outreach and education.

The first event in 1997 drew 135 volunteers to five locations, in 2010, nearly 2,000 volunteers picked up trash and recyclables at 52 locations in five counties. The Inner-Coastal & Watershed Cleanup is the largest inland cleanup in California, and has become a nation-wide model for watershed cleanup.