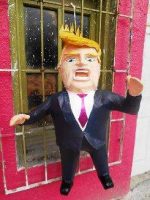 WESTMINSTER, Calif. – A man was charged and arraigned today on charges of throwing an object that damaged a patrol vehicle and inciting a group of protesters to riot at a Donald Trump presidential campaign rally in the City of Costa Mesa. Other arrests made by Costa Mesa Police Department have not yet been submitted to the Orange County District Attorney’s Office (OCDA). Luis Fernando Alarcon, 19, Anaheim, is charged with one felony count of vandalism with damage over $400, and one misdemeanor count of inciting a riot. If convicted, Alarcon faces a maximum sentence of three years in Orange County jail. The defendant was arraigned this afternoon and is being held on $25,000 bail. Alarcon is scheduled for a pre-trial hearing on May 9, 2016, at 9:00 a.m. in Department W-12, West Justice Center, Westminster.

On the night of April 28, 2016, a crowd protesting against the presidential candidate was blocking the street as the group moved south toward the State Route 55. At that time, the California Highway Patrol (CHP) was dispatched to Fair Drive and State Route 55, and one of the CHP officers activated their vehicle lights and sirens and was able to gain access to the ramp. The crowd cleared to the east and west sidewalks of Newport Boulevard. Another CHP officer who also responded observed the defendant in the crowd. Alarcon is accused of then running toward the second CHP officer’s vehicle, coming 12 to 15 feet of the CHP officer’s patrol car, and yelling “F*** the police!” at the officer through the vehicle’s open window. The defendant is accused of again yelling as he reached into his pocket, taking out an object, and hurling the object at the CHP officer’s patrol vehicle. The CHP officer heard a thud and observed an object that looked like a rock or roof tile fall to the ground. As a result, the vehicle sustained damages over $400.

Alarcon was subsequently arrested by CHP, who investigated this case.