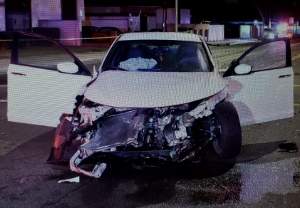 On Thursday, August 6th, 2020 at 10:25 PM, the Santa Ana Police Department MET Unit attempted to conduct a traffic stop on a male parolee suspect in the area of 300 N. Harbor Boulevard. The suspect refused to comply and a pursuit was initiated.

During the pursuit, the suspect vehicle struck a sedan causing him to lose control and collide into a police unit. Orange County Fire Authority personnel responded and treated the officer, suspect, and passenger of the sedan. All injured parties were later transported to an area hospital.

The suspect, identified as Simon Bradley Sulusi from Long Beach, was arrested at the scene for felony evading, felony DUI, and felon in possession of a firearm. He remains in custody at an area hospital.