About 1,400 runners and walkers participated in the Revive Santa Ana 5K Run on Oct. 23 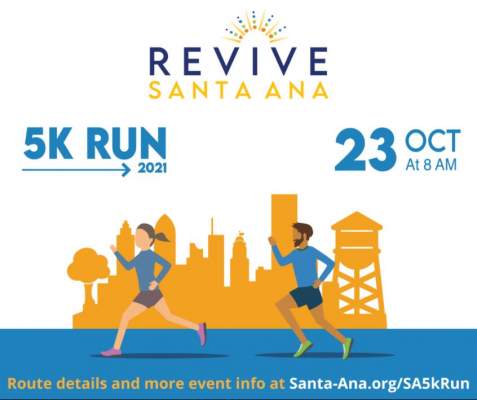 About 1,400 runners and walkers participated in the Revive Santa Ana 5K Run on Saturday, October 23. The race started at about 8:20 a.m., in Downtown Santa Ana. The event was free and included a bib, t-shirt and a medal.

The Santa Ana City Manager< Kristine Ridge, wrote in her latest newsletter that “It was inspiring to see our community enjoying a healthy social activity again after the 2020 5K was canceled because of the pandemic. Thank you to all of our participants for coming out on that drizzly day, to our Parks, Recreation and Community Services Agency for organizing the event, and to our other residents and businesses for their patience during the 5K road closures.”

The only hang-up at the event was the disastrous parking situation. The City of Santa Ana allowed the runners and walkers to park at the parking structure by the Santa Ana Police Department. However they did not advertise in advance that they would be charging a $5 parking fee and were only taking cash. There was literally nowhere to park around the area and those that showed up without cash had to park illegally in local business centers and pray that their cars would not be towed. The city should have allowed the participants to pay for the parking when they picked up the race running bibs and t-shirts! There were at least 12 Santa Ana city workers at the bib pick-up but only one guy was collecting the cash at the parking structure. The situation was so bad that the race was delayed for twenty minutes as the participants dealt with a city-created parking disaster.

City Councilman Johnathan Ryan Hernandez did not participate as he was involved in an unpermitted event touting his deceased cousin, Brandon Lopez, that took place nearby the race and started right after the race.