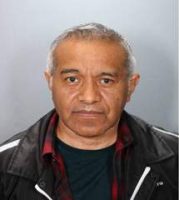 Yesterday, May 26, 2021, Jose Jimenez, turned himself into law enforcement at the Mexican border.  Jimenez was wanted in connection to the murder of Natalia Jaimes.

On Monday, October 26, 2020, at approximately 4:30 PM, SAPD Officers responded to the 600 block of West Russell Street for a welfare check.  Officers discovered an adult female deceased inside of a parked vehicle.  Orange County Fire Authority Paramedics responded and confirmed the woman was deceased.  During the preliminary field investigation, Officers learned the decedent was possibly a reported missing person from the city of Lake Forest on Friday, October 22, 2020.

Due to the suspicious nature of the scene, SAPD Homicide Detectives responded and assumed the investigation.  A preliminary field investigation by Orange County Coroner personnel did not yield a manner and cause of death, which is pending a post mortem investigation.

The identity of the decedent is being withheld pending identification by the Orange County Coroner’s Division and notification of next of kin.  Santa Ana Homicide Section detectives are coordinating their ongoing investigation with the Orange County Sheriff’s Department.