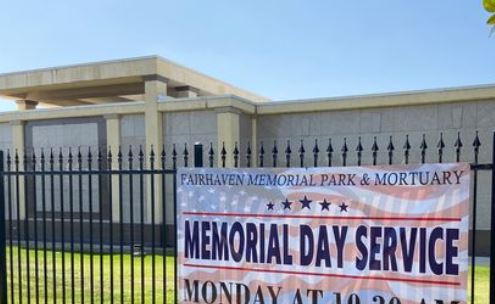 This event typically draws over 3,000 people to Fairhaven Memorial Park. We gather to
remember and celebrate the United States Military men and women who gave their lives in
service to our country.

Congressman Lou Correa will be leading the Pledge of Allegiance; Orange County District
Attorney Todd Spitzer and Santa Ana Mayor Vicente Sarmiento will be presenting
proclamations to recognize Retiring Master of Ceremonies, Reverend Lou Carlson. Senator
Tom Umberg will be speaking; there will be an honorary wreath laying by the Orange Elks
Lodge #1475 and a Moment of Silence for our fallen soldiers.

The National Anthem (complete with a streamer release) will be performed by Diana Chu, who
is this year’s “Star-Spangled Contest Winner” a 38 year old Mission Viejo resident who was
chosen from multitude of video submissions. There will be a fly-over by vintage WW2 T-6
Texans, a parade of Military Flags set to the sounds of an Armed Forces Salute played by the
Orange County Concert Band, patriotic-inspired musical performances by The Southern
California Children’s Chorus and a white dove release.

The Park will display “America’s Wars” a series of Life Size Photo Essays, Antique Cars,
themed props provided by RWB and lunch will be served to all of our guests