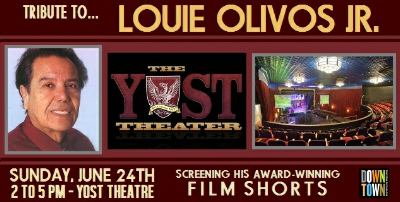 The Yost Theater is hosting a Tribute to Louie Olivos Jr., this Sunday, June 24, from 2 pm to 5 pm.  Olivos will be screening his award-winning film shorts:

« Did Barragan set a record by getting only 605 votes in the primary?
OC Health Care Agency marks National HIV Testing Day, on June 27 »