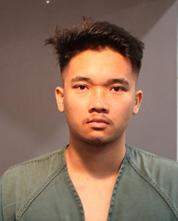 The SAPD Civilian Investigator, Detectives from the Special Crimes Section, and members of the Internet Crimes Against Children (ICAC) Task Force executed one final search warrant at Nguyen’s residence in the City of Westminster. Detectives seized multiple electronic devices during the search warrant and located evidence related to the uploading and distribution of over 500 pornographic images. Nguyen was booked into the Santa Ana Jail for the following violations: Distributing child pornography, possession and control of child pornography and Distribute intimate photos/etc. of another.